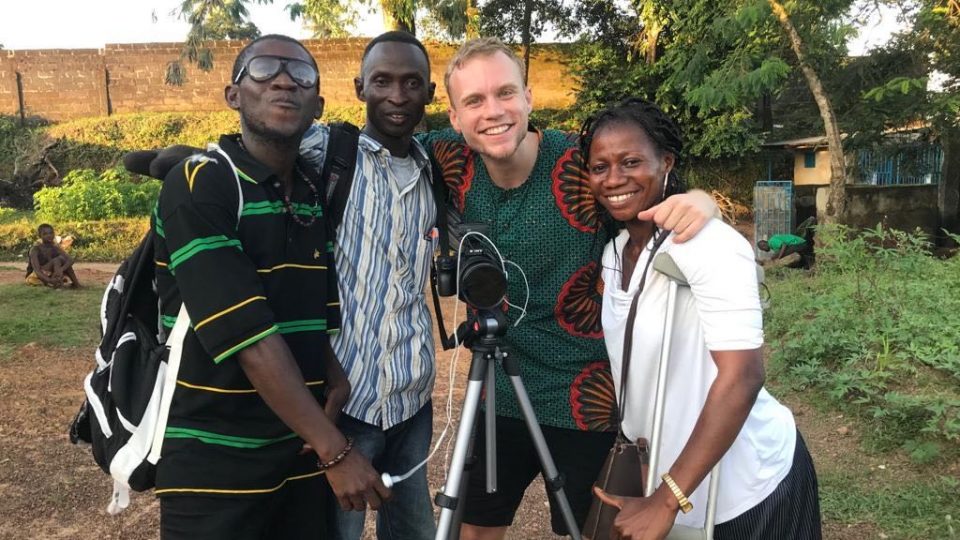 Documentary filmmaker and On Our Radar Advocacy & Content Manager, Chris Walter, manages the film and journalism work emerging from the Comic Relief funded-‘Beyond the Bite’ project. The project has invested in a new network of community reporters across Sierra Leone who are working together to cover the hidden stories of malaria. Chris spoke to Elizabeth Hughes about his experience of working alongside community reporters to capture broadcast quality film for global audiences.

How did you end up working with On Our Radar?

“I have always been drawn to the power of stories.

“My first job in London was working for a documentary film company. One of the most impactful films I worked on was about child refugees forced to flee into Lebanon to escape the violence of Syria’s civil war. It’s an amazing film but what I loved about it was that it was told completely in the children’s own words, with no adult voices. It was screened at film festivals worldwide,  but it was also shown on Newsnight and to influential policymakers and all kinds of people who could make change happen.

“A few years later, I took my camera to Sierra Leone with the charity Street Child. It was just after the devastating mudslide in Freetown in 2017 and families were being forced to leave the government camps that had been set up. They had lost absolutely everything.

“On Our Radar was on my radar for a while. I really believed in everything they were doing and my experience in Sierra Leone fitted with their work, so I got in touch, we had a chat and after six months this opportunity came up and it all fell into place!”

Hasn’t malaria ‘fallen off the radar’ for most people in the UK? Isn’t it now ‘old news’ here and an accepted risk in Africa?

“It has certainly become normalised in Sierra Leone and that’s actually one of the dangers. It’s so common that Sierra Leoneans view it almost like Westerners view the flu. Many rely on self-diagnosis and traditional remedies. Paying for medicines and treatment is expensive, so people will delay seeking help which is very dangerous. Malaria can escalate very quickly and eventually hit the brain, then there’s little you can do.

“The impact on the nation and individuals is huge. 40% of hospital visits in Sierra Leone are malaria related and people struggle to make ends meet when they’re ill because there’s no sick pay. That all impacts on the country’s productivity, but the human cost is massive. People will delay weddings and other celebrations if a relative is suffering from malaria, kids miss school and students miss university. Missing work or paying for treatment creates financial hardship. And not everyone survives.

“Ebola was the global news story, and rightly so! It’s a terrible, frightening disease. But malaria killed far more people in the same time period. It’s deadly and malaria continues to kill people.”

You’ve now spent a fair bit of time in Sierra Leone. Have you ever experienced malaria yourself?

No, I have been lucky enough to afford antimalarials, nets and spray, which is not the case for so many Sierra Leoneans. I have had Dengue Fever, which is also transmitted by mosquitoes, which I caught while travelling in South America after university. Some of the symptoms were pretty similar to malaria; a terrible fever and hallucinogenic dreams. I had that for a couple of weeks and was completely bed-bound so I have an appreciation of how frightening the symptoms can be.

Malaria is defined by many as a disease of poverty, as it affects those who are poorest and have the least access to treatment. Have you seen evidence of that during your film trips?

“Yes. People will only buy medicine if they can afford it. That’s ok if you’re a healthy adult and earning money, but for those who are unemployed it’s a challenge and pregnant women, children and the elderly are particularly at risk. It’s something our reporters know only too well. One of the project reporters gave birth while suffering from malaria and her child was born malaria-positive.

“I saw the devastating impact first-hand when I was over there a few weeks ago. We were filming with the community network on a paediatric ward for Comic Relief and following the stories of a couple of families who’d brought kids in for treatment. Unfortunately, we watched those children pass away which was really, really hard.

How did you cope with that as a film team?

“Nothing can prepare you for it.

“It’s so tricky, being behind the camera, especially when we’ve taken our antimalarials… It’s really difficult to see something like that. The past couple of weeks have been quite hard.

“We took time to talk with the community reporters, to acknowledge it and take time to think through the situation and the role of reporting it, and that has helped everyone. It reinforces the importance of journalism; for people to bear witness, take notice and change things.”